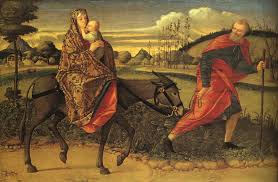 The citation of Hosea 11:1 in Matthew 2:15 is a well-known example of a New Testament text using an Old Testament text, and the explanations for this particular case are multiple. For the record, I think Matthew is reading Hosea 11:1 typologically, but that’s not the primary argument I want to make with this post. Instead, let’s observe that Jesus goes out of Israel and goes into Egypt (Matt 2:14), and in some way, “This was to fulfill what the Lord had spoken by the prophet, ‘Out of Egypt I called my son'” (Matt 2:15b, citing Hos 11:1).

My question is this: how does going into Egypt fulfill a text about going out of Egypt?

The most common explanation offered is that Matthew put the fulfillment formula where he did in anticipation of Jesus later leaving Egypt in Matt 2:21. Put another way, Jesus went into Egypt (2:14) so that “Out of Egypt I called my son” (Hos 11:1) could be fulfilled when he left (Matt 2:21). According to some scholars, if Matthew put his citation of Hosea 11:1 after the actual departure from Egypt (i.e. after Matt 2:21), it would compete with his fulfillment formula in Matthew 2:23 about Jesus being “called a Nazarene.” These same scholars acknowledge, though, that the placement of the Hosea 11:1 text doesn’t seem to be the most logical place.

A few scholars (such as Joel Kennedy, Leroy Huizenga, and Peter Leithart) offer a different explanation, one I find more compelling, and it is this: when Jesus left Israel for Egypt, he was fulfilling Hosea 11:1 because the land of Israel had become the new Egypt. Here are ten reasons I think this interpretation is stronger than the one more commonly presented.

There may be more reasons to consider, but I’ll stop with these ten. Do you find them compelling? I think their combined weight makes a strong case that “Out of Egypt I called my son” (Hos 11:1) is fulfilled when Jesus goes out of Israel and into Egypt. In Matthew 2, Israel is the new Egypt, Herod is the new pharaoh, and a new massacre of male babies is decreed. Jesus, who is consummate Israel and the very Son of God, embodies that Old Testament story in his own experiences. And in Matthew’s literary masterpiece (ahem: his Gospel), we witness the exodus of Jesus and are full of hope that God is up to something wonderful, something that even surpasses the greatness of deliverance from Egyptian captivity. A New Moses is on the scene, and sin and death must let his people go.

The five infancy narratives (Matt 1:18–2:23) have been arranged to contrast and alternate between Joseph and Herod. It breaks down this way:

In each of Joseph’s narratives, he obeys what an angel tells him in a dream (cf. Matt 1:20; 2:13; 2:19). This supernatural direction is important because of how dreams function in the Old Testament. As Leithart observes, “By biblical standards, this is a mark of royalty: Priests consult oracles and prophets see visions, while kings dream dreams.” Contrary to what you might expect, then, the king in Matthew 2 (Herod) isn’t the one who receives the dreams. Joseph receives them.

Here’s an excerpt from Peter Leithart’s thoughtful article called “Out of the Cave”:

Writing a book is like groping through a cave that no one else has explored or ever will, because you create the cave as you go. When it’s all done I can’t remember how I got through all the tunnels to emerge, blinking, into the sun. Once the book is published, readers will (I hope) be able to follow my simplified map. What they won’t see are all the blind alleys I tried out along the way.

I deeply enjoyed Deep Exegesis: The Mystery of Reading Scripture by Peter Leithart.  Chapter 5 is called “Texts Are Music” and it speaks to the literary structure of biblical texts.

Essentially Leithart argues that there may be more than one valid way to arrange a biblical passage.  Furthermore, multiple structural possibilities do not muddle the text but enhance and enrich it.

Leithart says, “Like intertextuality, multiple structure is virtually inescapable, especially in narratives and poetry” (143).  And, “Biblical writers are sensibly complicated, happy to tell several stories simultaneously and arrange their texts in three or four ways at once, just like normal people” (144).

Lately I’ve been preaching through the Book of Daniel, so I want to apply Leithart’s point to the whole work.  There are multiple ways scholars arrange Daniel’s twelve chapters.

Second, there’s a well-established chiastic arrangement of the Aramaic section (which comprises Daniel 2-7):

Third, from p. 325 of God’s Glory in Salvation Through Judgment, Jim Hamilton develops the chiasm even more, including chapters 1 and 8-12:

Fourth, on p. 27 of his article “Daniel’s Seventy Weeks and the New Exodus,” Peter Gentry offers two chiastic structures between the book’s prologue and epilogue:

Now to summarize.  If readers simply divide the Book of Daniel in half, the transition from court narratives (1-6) to apocalyptic visions (7-12) is highlighted.  If the Aramaic section (2-7) has its own structure, then the chiastic arrangement makes this section distinct.  But perhaps the Hebrew section (1, 8-12) should also be incorporated, so Hamilton and Gentry present two ways on how to do it.

The Book of Daniel demonstrates that multiple legitimate literary structures can exist within one work.