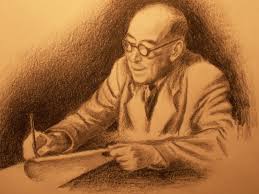 People come into your life at just the right time. Such is the good and wise providence of God, which brought a man across my path who left this world 50 years ago today on November 22, 1963.

I grew up in church and became a Christian at an early age. In junior high I began to question what I’d been taught, and various doubts plagued me intermittently for years. Was it reasonable to believe in God? How likely was it that Jesus really rose from the dead? What if what I believed was no more true than what someone else believed?

In high school my doubts had not abated–if anything they grew more intense as unbelieving friends asked me perplexing questions that left me thinking, “I’m not sure there’s a good answer to that. Could they be right?” I didn’t share my questions with anyone; I was actually embarrassed by them and felt it must be wrong for believers to ask such probing things.

I was given a copy of Mere Christianity, which was my introduction to this man named C. S. Lewis. It is no understatement to say that God used Mere Christianity to change my life. Here was an author, a former atheist no less, whose brain dispensed compelling reasons and arguments defending Christian teachings. As a teenager I was riveted. I consumed the book and wanted to read and understand more. I worked my way through The Problem of Pain, Miracles, The Screwtape Letters, A Grief Observed, and on and on. Lewis’ way with words was a feast for the eyes and fire for the mind.

Lewis wasn’t perfect, of course, and I don’t agree with every sentence he’s written, but I’m so grateful for him. He helped me understand that God expects us to use our minds to love Him and think about what we believe. Faith is not the enemy of the intellect, nor is thinking the death-knell for dogma. Christianity expects a rigorous use of our minds.

My favorite passage from any fiction I’ve ever read comes from the final lines of the last book in The Chronicles of Narnia. In book seven, entitled The Last Battle, Lewis ends his epic series like this:

And as He spoke, He no longer looked to them like a lion; but the things that began to happen after that were so great and beautiful that I cannot write them. And for us this is the end of all the stories, and we can most truly say that they all lived happily ever after. But for them it was only the beginning of the real story. All their life in this world and all their adventures in Narnia had only been the cover and the title page: now at last they were beginning Chapter One of the Great Story which no one on earth has read: which goes on for ever: in which every chapter is better than the one before.

I thank God for giving us C. S. Lewis for 64 years. What a blessing his writings continue to be! If you have never read him, I hope you will, and I hope you will choose Mere Christianity first. But don’t stop there. Enter the world of Narnia and believe the truth that Aslan is on the move.

“Don’t use words too big for the subject. Don’t say ‘infinitely’ when you mean ‘very’; otherwise you’ll have no word left when you want to talk about something really infinite.”

Believers should love to read and delight in God’s word.  The Bible proclaims amazing doctrines (like the doctrine of God, or the doctrine of salvation).  Sometimes it is especially helpful to acquire a good book on a theological topic that will do good things for your soul.  Books by authors who love the Bible can greatly aid the believer on the spiritual journey.  Check out this statement from C. S. Lewis:

“For my own part I tend to find the doctrinal books often more helpful in devotion than the devotional books, and I rather suspect that the same experience may await many others. I believe that many who find that “nothing happens” when they sit down, or kneel down, to a book of devotion, would find that the heart sings unbidden while they are working their way through a tough bit of theology with a pipe in their teeth and a pencil in their hand” (from his introduction to On the Incarnation by Athanasius).

In your devotions with the Lord, never abandon delighting in God’s word first and foremost.  But find a book of great and profound theology, and read some of it every day also.  Chewing on doctrine is good for your soul, good for your walk with the Lord.  Chewing on doctrine keeps your mind sharp, and it helps you process what you believe from the Bible.

If you are interested in a good book to start for incorporating doctrinal books in devotional times, try including one or more of these: Knowing God by J. I. Packer, Mere Christianity by C. S. Lewis, Desiring God by John Piper, Christian Beliefs by Wayne Grudem, The Pursuit of God by A. W. Tozer, The Knowledge of the Holy by A. W. Tozer, or How to Read the Bible for All Its Worth by Gorden Fee and Douglas Stuart.  There are countless more I could recommend.

Devour doctrine for your soul.  It will shape your mind and heart, which will impact your life.  Happy reading.