The Letter to the Hebrews wants us to understand Jesus in light of the Old Testament. And in the letter’s opening chapter we find the well-known trifecta of prophet-priest-king.

Long ago, at many times and in many ways, God spoke to our fathers by the prophets, but in these last days he has spoken to us by his Son, whom he appointed the heir of all things, through whom also he created the world (Heb. 1:1-2).

Jesus is God’s climactic revelation, the end of a line of prophets whose mouths declared the words of God. He is Prophet.

After making purification for sins, he sat down at the right hand of the Majesty on high, having become as much superior to angels as the name he has inherited is more excellent than theirs (Heb. 1:3b-4).

Jesus is the mediator between sinners and his heavenly Father. He alone made purification for sins. He is Priest.

Christ will reign forever. The “throne” and “scepter” and “kingdom” are all royal terms. He is King.

Christ is Prophet, Priest, and King. Hebrews 1 teaches us even more than that, but those ideas are a great start! 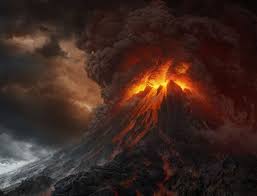 Mount Zion. Here’s how that breaks down.

Then a few verses later, “But you have come to
(1) Mount Zion and to the city of the living God, the heavenly Jerusalem,
(2) and to innumerable angels in festal gathering,
(3) and to the assembly of the firstborn who are enrolled in heaven,
(4) and to God, the judge of all,
(5) and to the spirits of the righteous made perfect,
(6) and to Jesus, the mediator of a new covenant,
(7) and to the sprinkled blood that speaks a better word than the blood of Abel” (Heb 12:22-24).

The stark contrast between Mount Sinai and Mount Zion is evident by the author’s use of seven images in both sections.

The writer of Hebrews said Jesus “entered once for all into the holy places, not by means of the blood of goats and calves but by means of his own blood, thus securing an eternal redemption” (Heb 9:12).

In his Hebrews For Everyone commentary, N. T. Wright writes, “This is perhaps the most striking, indeed shocking, idea in the whole letter. At almost no point in the voluminous Jewish literature from the Bible through to the Jewish writings contemporary with the New Testament, and indeed beyond, does anybody suggest that human sacrifice might be a good thing—still less that the Messiah himself would become such a sacrifice. Apart from the powerful and deeply mysterious passage in Isaiah 53.10, which speaks of the sacrificial death of God’s servant, the closest that Judaism comes to such an idea is the story of Abraham sacrificing Isaac at Mount Moriah (Genesis 22), a story which played a considerable role in Jewish thinking at this time, and which Hebrews will refer to in 11.17-18; but the point there, of course, was that God stopped Abraham actually killing Isaac. The sacrifice didn’t happen. Nor, of course, was there ever a suggestion that a high priest would have to become, simultaneously, both the priest who offered the sacrifice and the sacrifice itself. The idea would have been laughable if it hadn’t, almost certainly, appeared blasphemous” (p. 95).

The author of Hebrews wrote to people who needed to endure, to run the race and not turn back. He employed multiple strategies toward this goal.

It’s been said that sound theology is important for suffering and trial, and that is true. More specifically, you need sound christology for your suffering. Christology is a strategy woven throughout the letter, and Hebrews 7 takes an interesting turn when the author spends time on Melchizedek.

“Melchizedek?” you might say. “Really? Why not something a bit more relevant, someone a little more known, a subject a little easier to understand?”

To these saints who have already endured cost for their faith (cf. Heb 10:32-34), the writer waxes eloquently about a mysterious Old Testament figure who appears only twice before Hebrews (cf. Gen 14; Psalm 110), but he isn’t trying to be difficult for the sake of it. He knows that what he’s going to say “is hard to explain” (Heb 5:11). But does that mean it’s not worth saying?

Sometimes robust truth is what will hold you up. Hard times may need some hard teaching.

If you were writing a letter encouraging suffering saints to persevere, would Melchizedek be a topic you’d cover? The author of Hebrews doesn’t permeate his letter with paragraphs of this same caliber, but bringing up Melchizedek does serve his christological aim. The writer wants his readers to think great thoughts about Jesus, so from his arsenal he pulls out the four-syllable king of Salem, but he won’t stop there–he’s got something important to say about Jesus.

Don’t have a low estimation of what high christology can do for your soul during spiritual warfare. The writer wants the readers to take comfort and refuge in the truth about Jesus the Great High Priest, but how can Jesus be a high priest if he wasn’t from Levi’s tribe? Enter the purpose of Hebrews 7.

The subject of Melchizedek isn’t evoked to be impressive or heady. The author shows through typology how Jesus’ priesthood had an ancient precedent in someone who was both priest and king and held those roles without Levitical pedigree. Jesus was a priest like that. What he came to do surpassed, and was not vulnerable to, the inadequacies of the old system.

What’s the good news for sufferers about Jesus’ high priesthood? He’s “able to save to the uttermost those who draw near to God through him, since he always lives to make intercession for them” (Heb 7:25). Jesus is better than any previous high priest because he is “holy, innocent, unstained, separated from sinners, and exalted above the heavens” (7:26). He doesn’t offer perpetual sacrifices but offered one, once for all, and the offering was himself (7:27).

For the Hebrews writer, Melchizedek was a means to an end; he was never the point. He was useful insofar as he pointed to what the readers needed to know (or to remember) about Jesus. The author wanted them to think great thoughts about Jesus, and his strategy was to bring up Melchizedek so that they would be awed by the glorious intercessory work of the Son who reigns as the permanent high priest with an indestructible life. Jesus is able to help people who are being tempted (2:18), and he has mercy and grace to give them in their time of need (4:16).

When your knees are buckling and your focus is blurring, Jesus is who you need and has what you need.

I’ve been looking closely for commonalities shared among the three sections, and it’s interesting that each section contains a story about sacrifice.

Are there other motifs found in each of the three sections? 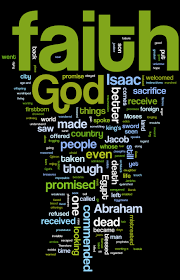 Typically in commentaries, Hebrews 11:3-38 is broken into two parts: vv. 3-31 contains all of the “by faith” statements, and vv. 32-38 provides a staccato-like list of names and miracles and sufferings culminating in a declaration that “the world was not worthy” of such saints.

The “by faith” list is interesting, though, because Hebrews 11:3-31 appears to break into three sections, all of which are inclusios.

Therefore, in the central section of names (vv. 8-22), Abraham’s name is in the middle “by faith” statement, and the repetition of his name in this section shows the author’s emphasis on Abraham. But what about this middle “by faith” reference? Here is the story condensed in vv. 17-19:

By faith Abraham, when he was tested, offered up Isaac, and he who had received the promises was in the act of offering up his only son, of whom it was said, “Through Isaac shall your offspring be named.” He considered that God was able even to raise him from the dead, from which, figuratively speaking, he did receive him back.

Does the middle reference to Abraham (v. 17) in the central section of names (vv. 8-22) have any distinction in the list? Yes. Certain distinctives suggest that the author of Hebrews has placed this Abrahamic story here for emphasis, and the three inclusios (11:3-7, 8-22, 23-31) and the seven “by faith” statements in the central section set up this emphasis.

To sum up: if there are inclusios present in the three sections of names (vv. 3-7, 8-22, 23-31), and if the central section has a middle “by faith” statement (v. 17) about an Old Testament story told with some distinction (vv. 17-19), then with the design of the name-list in vv. 3-31, the author may have been highlighting not only Abraham but specifically the patriarch’s near-sacrifice of Isaac.

Do you think that in Hebrews 11, the author designed the name-list to highlight Abraham’s sacrifice of Isaac? Do you think the inclusios I’ve suggested (vv. 3-7, 8-22, 23-31) are reasonable? Do you know anyone else who argues for them?