The Gospel Coalition was kind to post an article I wrote on the believer’s resurrection hope. An excerpt from “Every Graveyard a Garden”:

The resurrection of Jesus guarantees the same bodily hope for believers. His was “the first-fruits of those who have fallen asleep” (1 Cor 15:20). There will be a harvest of sleepers because resurrection broke into human history with the third-day miracle. The image of sleep captures the temporary captivity of death (cf. 15:51). We sleep to wake and die to rise.

Sowing and reaping, then, is true for death and resurrection: what goes down must come up. Every graveyard is a garden.

The full article is here. 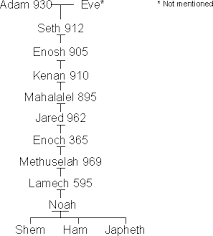 Amid the long list of ten generations recorded in Genesis 5, a father full of hope chooses a name for his son, and it’s the only name in the list explained for the reader–which means we should lean in close here and not blink.

When Lamech had lived 182 years, he fathered a son and called his name Noah, saying, “Out of the ground that the LORD has cursed this one shall bring us relief from our work and from the painful toil of our hands” (Gen 5:29).

The words of Lamech should sound familiar. The “ground that the LORD has cursed” refers to God’s punishment on Adam in Genesis 3:17, and his remark about “painful toil” is found there as well: “cursed is the ground because of you; in pain you shall eat of it all the days of your life.”

Let’s marvel a moment at how God’s judgment on Adam was faithfully transmitted nine generations later to Lamech. Remember: these people didn’t have the book of Genesis to reference. The reason Lamech knew about the judgment from 3:17 is because his father told him, and his father heard it from his father, and so on it goes.

Do you see what’s happened, then, with the judgment on Adam? It has been communicated to successive generations, and thus Lamech knows about it.

But Lamech said something else too. He hoped Noah would be the “one” who “shall bring us relief” from the curse. Now where did Lamech get the idea that someone would come to reverse the curse?

Since the first part of Lamech’s words connect to God’s judgment on Adam in Genesis 3:17-19, we should look first at that same context for any reference to a promised individual. And indeed, in God’s words to the serpent, we find such a promise.

When God judged the transgressors in the garden (Gen 3:16-19), he first spoke to the serpent (3:14-15), so the couple overheard the merciful promise folded into that first judgment: “I will put enmity between you and the woman, and between your offspring and her offspring; he shall bruise your head, and you shall bruise his heel” (3:15).

Like the curse in Genesis 3:17, this word of hope in 3:15 was also passed down from generation to generation. Nine generations later, Lamech hopes his son Noah is that promised one, the one who “shall bring us relief from our work and from the painful toil of our hands” (5:29).

Notice the beneficial effects of the promised one’s work: he will bring us relief. What that one does will be for those under judgment, and his act will reverse the curse. The rest (“relief”) that was lost in the Fall will be restored in the promised one of Genesis 3:15.

Lamech believed this. Because of generations faithfully passing down the words of God’s judgment and deliverance, Lamech knew the curse and the promise of a head-crushing individual who will come from the woman’s seed. Lamech also knew his son was in the line of the woman’s seed, so he named him “Noah” because it sounds like the Hebrew word for “rest.”

But soon the reader will realize Noah was not the promised one. His role is significant and memorable, but he doesn’t turn back the curse, nor does he bring deliverance to us. After the flood, sin continues, and the curse persists.

Lamech doesn’t know it yet, but Jesus–the one who will fulfill Genesis 3:15 and restore the rest that was lost in the Fall–is still a long way off. In the fullness of time, though, he will come, and he will crush the serpent’s head.

What was between the death of Jesus and his resurrection?  Saturday.  Here’s a poetic reflection of that silent day:

Yesterday morning I had the privilege of preaching from Hebrews 11:13-16 at Louisville’s Kosmosdale Baptist Church.  The message was called “A Far Country: The End of the Pilgrim’s Progress,” and the audio is here.

Believers are exiles waiting on the fulfillment of God’s promises, which include a world to come.  When we live in rock-solid faith that God will bring to pass all he’s promised, we can die in faith with hopes still unrealized.  Our faith, even at the point of final breath, is based on God’s trustworthiness.  He will keep his word.

The theme of spiritual exile is echoed in a letter written early in church history, The Epistle to Diognetus.  The writer says of Christians, “They dwell in their own homelands, but as strangers.  They share in all things as citizens, and they endure all things as foreigners.  Every foreign land is a homeland for them, and every homeland is foreign” (5:5, my translation).

Strangers in this world we may be, but God has prepared a city for his people, and he is not ashamed to be called the God of those who desire it (Heb 11:16).

I have a 2 year old, and our next son is due in 5 weeks.  I can’t imagine the pain of losing a child.

This article article will move you.  Ernie and Lisa Blanco’s son died shortly after Lisa gave birth to him.  The tone of Lisa’s writing is sweet, warm, and hope-giving.  Their example is inspiring, and their confidence in God is as it should be.

Doug Wilson wrote a thoughtful article explaining why Christians shouldn’t worry so much about new technology and new social media.

(2) Between the believer’s death and the resurrection of the body, there is an intermediate state of being “unclothed” or “naked” (2 Cor 5:4, 8).

So believers are now embodied and (if Christ’s return tarries) will be disembodied at death.  But disembodiment is not the hope of the believer, as if the body were a prison for the soul.  No, Paul says that we groan in these earthly tents (2 Cor 5:2, 4), longing for our heavenly dwelling (resurrection body).  The hope is for re-embodiment.

From 2 Corinthians 5:1-10, then, I think we can affirm a disembodied intermediate state for every believer that dies.

At the return of Christ, every dead believer will be re-embodied in a glorified body.  Any believers that are living when Christ returns will be transformed and glorified in the twinkling of an eye (1 Cor 15:51-52).  What a blessed hope!