The term beatitude is from a Latin word meaning “happy” or “fortunate.” In Matthew 5:3-10 there are eight beatitudes, eight statements beginning with “blessed are…”:

Are these eight beatitudes randomly arranged? No, they are thoughtfully and carefully organized, and several literary clues will help us admire Matthew’s arrangement of them. Below are six structural observations that some New Testament scholars have made about Matthew 5:3-10.

First, the first and eighth beatitude have the same promise (“for theirs is the kingdom of heaven”). These two beatitudes also give their promise in the present tense (“is”), whereas the other beatitudes are in the future tense.

Second, the first four beatitudes all start with a p-sound in Greek, which doesn’t come across in English translations. This design is apparently to divide the first four from the rest, creating two groups of equal number.

Third, the two groups (beatitudes 1-4 and 5-8) each have a total of 36 Greek words, further clarifying that we should view the eight beatitudes as two groups of four. There is no miscellaneous word in any beatitude.

Fourth, the last beatitude of each group (beatitudes 4 and 8) both concern “righteousness” in some fashion.

Sixth, the beatitudes fall into an interesting chiastic pattern according to tense:

Any other structural observations to add? 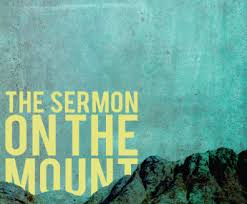 The structure of the Sermon on the Mount is debated among commentators. The following breakdown is the outline and literary structure I find most compelling among the suggestions they offer.

The Sermon on the Mount is from Matthew 5:1–7:29. Two occurrences of “the Law and the Prophets” (5:17; 7:12) appear to section off this large teaching block into three sections:

The middle of the “main message” section is about “Disciplines,” and there just happen to be three of those also:

The middle discipline–Praying–breaks into (wait for it…wait for it…) three parts:

I’m currently preaching on this Sermon at Kosmosdale Baptist Church, and the introduction to Matthew 5–7 can be heard here.