Biblical prophecy doesn’t necessarily function as a direct prediction that meets a single exhaustive fulfillment. The Bible’s authors also considered patterns to be prophetic. Such patterns could have multiple fulfillments as time marched on.

Consider Matthew 15:7-9. Jesus told the Pharisees, “You hypocrites! Well did Isaiah prophesy of you, when he said: ‘This people honors me with their lips, but their heart is far from me; in vain do they worship me, teaching as doctrines the commandments of men.'”

In Matthew 15:7, Jesus introduced a quotation from Isaiah 29:13. Now if you dissect Isaiah 29:13 carefully, there is no indication that it is any direct prophecy. Isaiah didn’t mention Pharisees when he quoted Yahweh’s words for his eighth-century B.C. readers, yet Jesus told them, “Well did Isaiah prophesy of you.”

How exactly did Isaiah prophesy about the Pharisees? Jesus discerned Isaiah 29:13 to be a prophetic pattern. The Pharisees were a typological fulfillment of the kind of people Isaiah addressed, people who had fraudulent hearts. When Isaiah prophesied about those who worshiped in vain, his words applied to (or would be “fulfilled” in) anyone whose worship was also vain despite their lip-service and religious ritual. People in Isaiah’s day fit the pattern, people in Jesus’ day fit the pattern, and so do people in our day. This means we too should be warned, lest Isaiah’s words be “fulfilled” in us.

In the Old Testament, there were three occasions when people died and were brought back to life. In 1 Kings 17:17-24, Elijah raised a widow’s son. In 2 Kings 4:18-37, Elisha raised the Shunammite’s son. And in 2 Kings 13:21, a dead man revived when his body was thrown into a grave with Elisha’s bones.

So far, if you’re keeping score, physical resurrections in the Old and New Testaments pan out like this:

The power of Jesus’ ministry surpasses the greatness of Elijah and Elisha. Like Elijah, Jesus raised a widow’s son (1 Kings 17; Luke 7), but the number of people raised by Jesus was greater than the number by Elijah. Jesus also raised more people than Elisha did. Furthermore, like Elisha, resurrection was associated with Jesus’ death, but in a greater scope. When a dead man was thrown into a grave and touched Elisha’s bones, that one body revived (2 Kings 13). But when Jesus died, “The tombs also were opened. And many bodies of the saints who had fallen asleep were raised” (Matt 27:52).

A second-century document known as the Infancy Gospel of Thomas claims Jesus did miracles as a child. In it, Jesus makes clay birds and brings them to life, he causes a child’s body to wither, he strikes some neighbors with blindness, he resurrects a friend who died, and he heals his brother from a snake bite.

But when we look into the Four Gospels of the New Testament, we see reports about Jesus’ birth, a later visit by Magi, an escape to Egypt, a move to Nazareth, and an episode of his teaching in the temple when he was twelve (Matt 1-2; Luke 1-2). No childhood miracles are reported at all. Not one healing, not one extraordinary feat.

At least two excerpts from the New Testament can be bolstered to argue that Jesus was not a wonder-working child.

The Four Gospels do not reveal much about Jesus’ childhood. Luke tells us that as Jesus grew up, he “increased in wisdom and in stature and in favor with God and man” (2:52). Wisdom, yes. Jesus demonstrated it as a twelve-year-old in the temple, which he called “my Father’s house” (2:47, 49). He also displayed obedience to his parents (2:51). But was he known as a miracle-working child growing up in Nazareth? No.

During his earthly ministry, when Jesus began performing miracles, they served as kingdom signs and signals. Prior to his public ministry, Jesus did not perform these mighty deeds. He was no wonder-working child. And this isn’t bad news, for the purpose of his miracles was never for amusement, convenience, boredom, or shock.

At the appointed time, however, Jesus would do and say all that the Father gave him to do and say (see John 5:19-20). Lepers would be cleansed, the blind would see, the deaf would hear, the lame would leap, the mute would speak, and the dead would live. Demons would be overcome, stormy wind would be stilled, crashing waves would fall flat, fish and bread would be multiplied, and a fig tree would wither. And then, when the appointed Hour arrived, sin would be atoned for, justice would be satisfied, the earth would quake, the temple veil would split, and graves would send back their dead.

It is no secret that there are connections in Genesis to ancient Near Eastern creation accounts. Debate exists as to how that relationship should be explained, though that’s not the purpose of this post. I want to highlight seven elements in Genesis 1 that, when compared with other creation accounts from the Near East, shine brightly like diamonds on black cloth.

(1) There is one God in Genesis 1. This truth flies in the face of the ancient Near Eastern creation accounts which consistently speak of multiple deities. One God made the world.

(2) The one true God has no past genealogy. This too is different from creation accounts which speak of gods who were born because other gods came together. There never was a time when God was not.

(3) God is omnipotent. This all-powerful Being is superior to all he’s made, with no equal rivals. His power differs from gods in the ancient Near East who were restricted, vulnerable, and could be defeated.

(4) Creation happened according to God’s command. “Let there be,” he said, and there was. Gods of the ancient Near East often had to contend with creation, to wrestle with material and divine forces.

(5) God did not use already-existing materials when he began to create. By his power, he made everything from nothing. The gods of the Near East, however, relied on coexistent material (and even other gods) to create.

(7) God made creation “good,” even “very good.” No warfare, no skirmishes between gods, no tainted world. In Genesis 1, the Lord evaluated what he made and declared it good!

The creation account in Genesis 1 may stand out in other ways when you compare its language with other accounts from the ancient Near East, but the previous seven distinctions certainly are a start.

John the Baptist and Jesus have some fascinating parallels. Here are 10:

Do you know other parallels between them?

2014 was full of some great highlights for me and our family. Here are some ramblings on some samplings:

January: Jensen started team sports this year, beginning with joining a basketball league for his age group–he’s tall and fast, so he had a blast and wants to play again next time. Due to polar vortex activity, we had sub-zero temperatures in Louisville, where one day the wind chill brought it down to -30!

March: Mom-in-law came to visit along with family from Oklahoma for a week–we were glad they spent their spring break with us! Wrote a paper which was included in HBU’s “Paul and Judaism” conference.

April: Welcomed our friends, the Lindsey family, to stay for a week. Went to Together for the Gospel (a.k.a. T4G, held every other year in Louisville). Hosted my parents and aunt for a week. Marked 15 years of preaching–time flies!

May: Signed a contract with Crossway Books to write a commentary on Daniel. Saw a Louisville Bats game with our church. Jensen completed his first year of schooling with Classical Conversations. Jensen started tee-ball.

June: Baptized some church folks! Had a great week of Vacation Bible School at our church. Started preaching through the book of Revelation–gulp. Logan turned 3!

July: Sent two of the boys (Jensen and Logan) to Texas for a two-week vacation with grandparents. Celebrated 9 years being married to Stacie!

August: Starting teaching as an adjunct for Boyce College, which was a phenomenal experience. Completed an exposition of the book of Hebrews. Hosted mom-in-law and one of our nieces for a week.

September: Attended the annual “Fall Festival” at Southern Seminary. Jensen started soccer–which turned out to be the sport he preferred the most.

October: Hosted a weekly book study in our home for the ladies in our church.

November: Had a great Men’s Retreat for our church, with Gunner Gundersen serving as the speaker. Hosted my parents for a week. Finished teaching my first semester at Boyce College. Flew to San Diego to present a paper at the annual meeting of the Evangelical Theological Society. Jensen turned 6! Hosted Thanksgiving at our house with family from Oklahoma–such a fun week!

December: Attended an Advent concert at Southern Seminary with our church. Right before Christmas, flew to Texas for a two-week holiday vacation extravaganza. 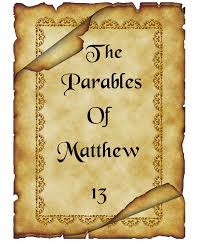 The question in Matthew 13:51, “Have you understood all these things?”, seems to separate the first seven parables from the eighth. The seven parables in 13:1-50 are about the presence, power, and word of the kingdom, and the eighth parable in 13:52 is about the disciples.

Consider similarities between them. Parables 1, 2, and 3 all concern the act of sowing into the ground. Parables 5, 6, and 7 all concern finding something you want to keep: a treasure, a most valuable pearl, and good fish. Parable 4 is not about sowing, nor is it about finding something worth keeping. In Parable 4 Jesus said, “The kingdom of heaven is like leaven that a woman took and hid in three measures of flour, till it was all leavened” (13:33). Adding to the uniqueness of this parable is the fact that it is the shortest of the seven. And being Parable 4, it is the central parable of the seven. When you focus on the language of the verse, Parable 4 is also a perfect transition from the first three to the last three: Parable 3 tells of seed going into the ground and tremendous growth taking place, and Parable 4 tells of leaven going into dough and tremendous growth taking place; and Parable 4 speaks of leaven being hidden in flour, and Parable 5 speaks of a treasure hidden in a field.

For these reasons and perhaps more, has Matthew indicated by his arrangement that 13:33 should receive special emphasis? Am I overreading the structure? Thinking out loud here.