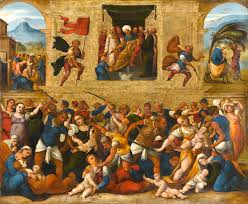 May I engage your imagination? Think about the tragedy summarized in Matthew 2:16: Then Herod, when he saw that he had been tricked by the wise men, became furious, and he sent and killed all the male children in Bethlehem and in all that region who were two years old or under, according to the time that he had ascertained from the wise men.

There are grim stories in the Bible, ones terrible to read and tell, ones you’d never see becoming a key story for VBS curriculum or inspiring a Veggie Tales song. There are some stories you wouldn’t want a painting on your wall to depict. If certain verses were acted out in movie scenes, you might put your hands over your eyes.

The Bible doesn’t hide the egregious acts sinners are capable of. And because God has preserved such stories for the Church, we must read them. We must learn from them. We must see them in light of the redemptive threads God is weaving in his Word. We must put our eyes on words of pain which form sentences of suffering, and we must feel the horror they convey.

The story of the massacre in Bethlehem is disturbing but real, horrible but historical.

How would Herod’s order have been carried out? Would soldiers have assaulted the town during the day or at night? We’re not told. But because Herod had been keeping his agreement with the wise men a secret (cf. Matt 2:7-8), we’re on firm footing to believe that Bethlehem wasn’t warned ahead of time. There was no public announcement, no time to gather family members and flee.

Only one family had escaped, and that happened before the soldiers ever arrived. An angel had appeared to Joseph in a dream with a warning, so Joseph took Jesus and Mary and fled to Egypt (2:13). The other fathers in Bethlehem had no dream like that. They had the nightmare–the event itself.

When the soldiers came to Bethlehem, it is unlikely they were carrying birth records that told them which house and family to visit. And considering the brutal king they represented, it is unlikely they politely explained to each family what the king had ordered. Did the soldiers just bust threw the front doors? Did they split up and go home to home, making sure to sweep the surrounding region too (Matt 2:16)? Herod wanted them to be thorough. The soldiers knew that, given their ruler’s maniacal ways, failure wasn’t an option. Their own lives were contingent on completing the mission of the massacre.

There was no wanted poster with a picture or physical description of the young king of the Jews. The soldiers had only their subjective judgment. If a boy in the home looked two or younger, he was killed. Period.

Can you imagine the horror the families of Bethlehem must’ve endured? The squad of soldiers arrived with no other agenda but to murder anyone fitting Herod’s decree.  Children would’ve been nursing, not even sleeping through the night. Others would’ve been sitting up on their own, trying to crawl and mouthing syllables or words. Some would’ve been walking and stringing phrases together. No matter the stage of development, if a boy in Bethlehem looked two or younger, he was prey for the predators. He would be helpless, defenseless, vulnerable.

But not everyone in the home would be as helpless. There would be more casualties in Bethlehem than only some children. Do you think parents would’ve sat idly by while their young boys were wrenched from their grasp? Would you have said, “Whatever King Herod wishes is fine with me”? No, you wouldn’t have. Moms and dads would’ve perished in the Bethlehem massacre too. Fathers may have been caught off guard and unarmed, but I still imagine that fewer soldiers returned to Herod than the original number he dispatched.

In the aftermath, the weeping and wailing would’ve been disheartening and crippling. A dark cloud of mourning would’ve settled over David’s town. For the foreseeable future, Bethlehem would not be the same.

The soldiers returned to Herod, no doubt thinking the plot to kill the Christ-child was successful. “We got them,” they probably reported. “Not one escaped.”

3 thoughts on “A Massacre in Bethlehem”