We’re in recovery mode, and we want links to read. What are we recovering from? Classes are speeding toward final exams, for many folks graduation draweth nigh, the smell of intellectual rigor still lingers in the air from the ETS-IBR-SBL blitzkrieg, and our bodies are still coping  from what we did to them on Thanksgiving. So what do you need? Links, of course, and a slew of them. That’s where I come in. Below you will find a litany of resources from people of various denominations, backgrounds, and theological positions. It’s a carnival–the biblical studies kind–so hold on tight and enjoy the brain-feast.

The annual meeting this year was in Baltimore, MD. Cliff Kvidahl posted audio of some sessions, and you can also order MP3s of what went down.

A highly-anticipated panel discussion centered on inerrancy, and Peter Enns reflected on how it went. Questions to and answers from the panelists can be read thanks to a live-blog of the discussion.

Denny Burk and Larry Hurtado each gave their take on the annual meeting as a whole.

Mike Bird wrote some funny stuff before the meetings began, and it’s still worth reading even though they’re over!

Helpful for future meetings are these thoughts from Fred Sanders on how to give a conference paper (just between you and me, pretend the 2011 date is really 2013).

James M. Hamilton’s essay “The Seed of the Woman and the Blessing of Abraham” is now available for free in Spanish.

Genesis 3 always deserves stimulating engagement, and in this video, D. A. Carson teaches on the temptation of Adam and Eve.

Mike Heiser writes about Yahweh and Satan in Samuel and Chronicles.

Joel Watts uploaded his SBL paper for all to read: “Working on a Building: Mark’s Correspondence to Daniel’s Structure.” [This link could just as well go in the NT section below.]

Robert Holmstedt linked to his SBL paper on the linguistic profile of the book of Esther.

Since 2014 is only weeks away, you’re probably already planning books you’d like to read, so why not add the Pseudepigrapha to the list? The literature was important for the intertestamental period, and Joseph Kelly has organized a way to read the Pseudepigrapha in a year.

Danny Zacharias tells us about the articles and reviews in the latest Journal of Hebrew Scriptures.

Suzanne McCarthy writes about the end of time and space.

Rusty Osborne links to his Tyndale Bulletin article on the early messianic afterlife of Ezekiel 17:22-24.

Is Job 1:21 good theology? Some may say no, but Andy Naselli says yes and explains why.

Abram K-J asks, “Who is Isaiah’s shepherd of the sheep?”

Daniel Motley provided his 60-page annotated bibliography of the personification of Wisdom (with a focus on Proverbs 1-9).

Interested in the book of Hosea? Claude Mariottini has put together some studies on it.

Are you aware of the international journal Biblical and Ancient Greek Linguistics, edited by Stanley Porter? Well now you are. 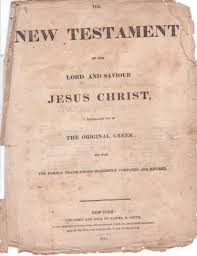 Ray Van Neste assesses Schleiermacher on the authorship of 1 Timothy.

The new website DeRouchie & Meyer is devoted to Old and New Testament scholarship that bridges the gap between the academy and church ministry.

Preston Sprinkle continues his blog series on homosexuality and the Bible with a post on Romans 1.

Nicholas Batzig discusses three views on Romans 2:13. From his concluding thoughts: “While it has lost traction in recent years, ‘the hypothetical view’ offers, in my opinion, the strongest defense of the overall context of Romans 1:18-3:20.” David Capes gives reasons why we should marvel at the genealogy in Matthew 1.

Bosco Peters writes about N. T. Wright and Sola Scriptura. See especially the interesting comments after the article, such as those by Bob McDonald.

Margaret Mowczko writes about how the word “likewise” may affect certain NT passages about women. She also discusses Philip and his prophesying daughters in the book of Acts.

Daniel Wallace writes on a bibliology grounded in christology.

Scot McKnight says that the Sermon on the Mount is the gospel.

Andrew Perriman raises important questions about the “coming” of the Son of Man.

In his new book The Historical David: The Real Life of an Invented Hero, author Joel Baden argues that David has been greatly misunderstood and caricatured, and he explains more about the book in this interview led by Jonathan Merritt.

Andrew Wilson reviewed Book I of Paul and the Faithfulness of God by N. T. Wright, which is Wright’s newest volume in his

Patrick Schreiner thinks you should get the 2nd edition of Dictionary of Jesus and the Gospels.

Cody Kingham reviewed The Race Set Before Us by Thomas Schreiner and Ardel Caneday.

Brian LePort reviewed Memory, Tradition, and Text: Uses of the Past in Early Christianity, a book edited by Alan Kirk and Tom Thatcher.

Abigail Walthausen says “Don’t Give Up on the Lecture.”

If you’re writing your dissertation, I wrote about twelve practices that helped me.

Logos is having a wild Black Friday sale that ends December 2. So you’d better hurry.

In light of his impending death, Rod Decker talks about his presentation “When Your World Crashes Down.”

Be on the lookout for next month’s Biblical Studies Carnival from Jessica Parks, who will host it either at Facing the Jabberwock or Cataclysmic.