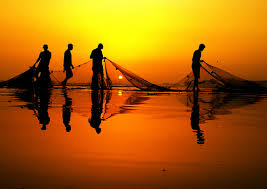 Old Israel consisted of 12 tribes, so Jesus chose 12 disciples. He began his selection in Matthew 4. The location was significant too: “territory of Zebulun and Naphtali” (4:13). Those names came from two of the 12 tribes.

What is Jesus doing in Matthew 4? Launching his public ministry. Part of this launch will mean beginning a new Israel, so in land tied to the history of the old Israel he summons fishermen. These men will be part of the crew who serve as a new community, a group of disciples, a New Twelve.

In the land of Zebulun and Naphtali, Jesus calls out Simon, Andrew, James, and John. In the soil of the old Israel, he begins to summon the new.