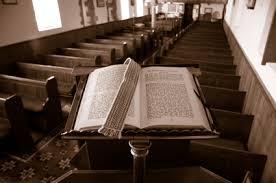 On April 18, 1999, I preached my first sermon at age 16. My life changed that Sunday morning when I finished the message. A calling descended upon my introverted tendencies and propelled me out of my comfort zone. The future was in vocational Christian ministry.

Now, exactly 14 years later, and after saying “let’s open our Bibles together” more than a thousand times, I am grateful to be in the ministry preaching the Bible. If I thought long and hard, I could come up with more than 14 lessons about preaching, but matching 14 lessons with 14 years is just the kind of numerical parallel a preacher would make.

Here are the first 7 lessons in a two-part post.

1. Listen to Great Preaching – Pay attention to those who excel at doing what you’re called to do. Musicians must listen to great music, directors must learn from great movies, and authors must read great books. Preachers are no exception to this principle.

In history and in the modern day, God has gifted his Church with tremendous pastor-teachers. Listen to how these preachers handle the Bible, how they apply the text, how they illustrate their points, how they turn a phrase for maximum impact. Since YouTube doesn’t have video clips of Spurgeon or Edwards, read their manuscripts and let their words feed and shape your soul as a preacher.

It’s difficult to limit my favorite preachers to only a handful, but be edified by the likes of Alistair Begg, Ligon Duncan, John Piper, D. A. Carson, Voddie Baucham, Paul Washer, Paul Tripp, Russell Moore, Jim Hamilton, and Sinclair Ferguson.

2. Be Receptive to Feedback from Trusted People – You need feedback–especially early in your preaching as you’re learning to prepare a discourse on the World’s Most Important Book, but also throughout your ministry.

Find people you trust, who will be honest with you, and ask them for constructive criticism. Ask specifics like, “Am I talking too fast? Are my transitions awkward? Does my introduction helpfully set up the passage? Was the flow of my message anchored in the flow of the verses? Was the point(s) of my message the same as the point(s) of the passage? Did I go down unhelpful rabbit trails that lost listeners and made it hard to recover?”

Preachers must want to be instruments used by God, but don’t settle for being a dull instrument when the Lord can use feedback from others to sharpen you. Experience matters, so seizing opportunities to preach will place you in situations where others can give you constructive criticism. You need to know (ideally, as soon as possible!) whether you have verbal phrases or nonverbal ticks that are distracting and need to be modified or nullified. Technique is not what saves people, but listening to feedback can certainly help others listen with less squirming and cringing!

3. Learn, Read About, and Grow in the Craft – Building on what I just said, people committed to preaching should strive to preach well. The task of a preacher is manifested publicly and orally. A preacher should continually strive to grow in the craft because he cares about his calling and his listeners.

While the ability to preach is ultimately a gift from God, the mechanics of the craft itself can be improved. Tone of voice matters, because varying your tone and pitch are helpful to listeners. And volume should vary, for no one wants to listen to a preacher shout or whisper his entire sermon. Eye contact communicates to people that you’re aware they’re there and that what you’re saying is God’s Word for them. You’re not talking to the air, you’re talking to image-bearers.

Read books on preaching. Good ones include Biblical Preaching by Haddon Robinson, Christ-Centered Preaching by Bryan Chappell, Preaching and Preachers by D. Martyn Lloyd-Jones, The Supremacy of God in Preaching by John Piper, Between Two Worlds by John Stott, Preaching With Bold Assurance by Hershael York and Bert Decker, Spirit-Led Preaching by Greg Heisler, and Saving Eutychus by Garry Millar and Phil Campbell. Whether you’ve been preaching for a year, ten years, or sixty, retain the mindset of a student of preaching. Be willing to learn, grow, and improve.

Pray for your soul as you study. Pray for insight, conviction, and conformance to the image of Christ, for yourself and your hearers. It is a dangerous thing to listen to a sermon because hearers may be hearers only (Jam 1:22), so pray for their response, their obedience, their glad reception of biblical truth.

Pray that you’ll manage your time well as you prepare. Pray earnestly for focus, wisdom, understanding, and the courage to say what God says in his Word. Pray that your preparation will make you a better father, husband, and man of God as you leave your desk and return home to your family. Be aware that God will often bring into your life opportunities to apply the very thing you’re preparing to preach.

5. Don’t Fret Over Fancy Outlines – Can I tell you a secret? People don’t remember your fancy outline from 3 weeks ago, and you probably can’t recall it either. If every week you’re giving hearers acrostics or alliterated points, know this: they don’t stick. You may have spent hours (please don’t!) crafting fancy and clever outlines, but that time is better spent elsewhere. Spend that time mulling over the text, aiming for clarity of thought and pursuing the best interpretation.

If you give an outline, a textual one may be best, perhaps showing in the bulletin the divisions of the passage you’re preaching. If you preach from a manuscript that gets published on your church website, then thinking about the headings is important for the outline of the message, for the outline is no longer for your personal use or even your oral delivery but for visual clarity and organization on a public medium. If you don’t preach from a manuscript but give a passage breakdown aloud at the start of the message, people may then have a chance to mark their Bibles accordingly or jot down the divisions in separate notes. But beyond that, don’t labor each week to create memorable outlines for your sermons.

Even if your outline remains in your head more than 10 minutes after you finish the sermon, that’s because you spent so long during the past week thinking it up. Your hearers didn’t spend the time you did on it, so it makes more sense as a memory aid for you. If working on a clever outline helps you keep pace during the preaching exercise, so be it. But don’t spend unreasonable amounts of time trying to make it cutesy. Instead, use that time to return a phone call, write a Thank You note, or go home early and surprise your wife. She’ll be glad you did, and the congregation on Sunday will not think, “I wish he’d made an outline I could remember this time.”

6. Preach Tough Texts – Since all the Bible is profitable for teaching, reproof, correction, and training in righteousness (2 Tim 3:16), show your hearers how to handle tough texts. Let’s be honest, some parts of Scripture are easier to craft a sermon from than others!

Prepare a message from a genealogy, a long psalm, a section of Obadiah, or a chapter of Revelation. Show your hearers that you really believe God speaks through all his Word. What a congregation deems as “tough” may be due solely to unfamiliarity. Expose them to Ezekiel, to Leviticus, and the Song of Songs. Preach on the “sons of God” in Genesis 6, the “slaves and masters” household codes in the Epistles, and the killing of the Canaanites in the book of Joshua.

Tough texts are there for preaching, not for window-dressing. Some passages require more work and study because of their complexity, but don’t be a lazy preacher! Put in the time. It’s okay if you’re learning as your hearers do. And be honest about the toughness of some passages. If there are thorny interpretive issues, it may be wise not to delve into all the details of those, but don’t make the opposite mistake and pretend the passage is cut and dry and easy to understand for anyone with two eyes and a brain.

7. Preach Controversial Texts – This point goes along with the last one. Texts may be tough for a number of reasons and controversy is certainly one of them. But controversial texts aren’t there to be avoided. They’re not strategically positioned to bridge the texts you should actually address.

The Bible speaks to all sorts of things you should talk about when you’re in those texts. Don’t board a boat and head to Tarshish when you come to passages about predestination, hell, homosexuality, end times, speaking in tongues, divorce and remarriage, and women in ministry. Preach them! Study hard, pray for humility and wisdom, and tell people to open their Bibles with you to Romans 9 or Revelation 20.

Years ago, when I was writing 3 different expositions a week for Sunday morning, Sunday evening, and Wednesday evening, I unknowingly set myself up for a particular week of controversial texts when the passages fell on predestination, speaking in tongues, and women in ministry. What a week that was! Spread out your controversy better than I did. There is a lesson hidden in this story, however. When you preach expositionally, and when that exposition takes you through whole chapters and books of the Bible, you can’t avoid tough and controversial texts. Chapter and book exposition forces you to deal with the next passage. Even weeks away from a hard text, at least you know it’s coming.

1. Listen to Great Preaching
2. Be Receptive to Feedback from Trusted People
3. Learn, Read About, and Grow in the Craft
4. Pray for Yourself, Sermon, and Hearers
5. Don’t Fret Over Fancy Outlines
6. Preach Tough Texts
7. Preach Controversial Texts